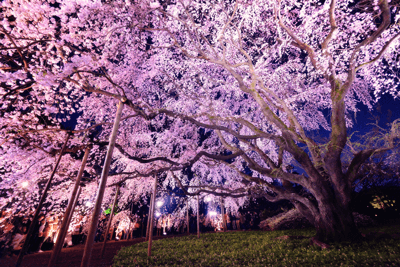 Hanami or 花見 is the Japanese tradition of appreciating the ephemeral splendour of flowers. When the Japanese talk of flowers in this case they are almost always referring to those of the cherry, or “sakura” tree or, less frequently, the plum, or “ume” tree.

From the end of March to early May, cherry trees bloom all over Japan, and on the island of Okinawa on or around the first day of February. The blossom forecast or “cherry blossom front” as it is known, is proclaimed each year by the weather bureau and is scrutinised closely by those planning to celebrate hanami as the flowers only last a very short time, perhaps just a week or two. In modern-day Japan, hanami typically consists of enjoying an outdoor party underneath the sakura. Hanami at night is called “yozakura” meaning literally “night sakura”. In many places such as Ueno Park in Tokyo, for yozakura, short-term paper lanterns are hung, illuminating the trees majestically.

An older form of hanami also occurs in Japan, and this is the enjoying of the plum blossoms (梅 ume) instead or the cherry. This kind of hanami is more prevalent among older people because they tend to be somewhat quieter than the Sakura parties, which usually involve younger people and can occasionally become very crowded and noisy.

Japan takes these matters very seriously and makes the cherry blossom predictions with great care. In fact, with one weather broadcaster actually, collects observations from over 10,000 trees throughout the country.

That is of particular importance for tourists from all over the world, who organise holidays specifically to catch a glimpse of the blossom in all its majestic beauty. Japan’s tourism ministry states the number of foreign tourists peaked in April last year, thanks in large part to the popularity of the sakura flowers.

There is no exception this year as this week crowds of tourists and local residents set off with a myriad of selfie sticks and mobile phones in Tokyo’s Ueno Park. They were flocking to enjoy the cherry blossoms which now have officially marked the start of spring.

The weather bureau initially announced the season would start on March 21st with the flowering of sakura blossoms at the Yasukuni Shrine, but, because of an unexpected bout of cold weather other places in Tokyo were denied the sight.

This week a jump in temperature of 17 degrees Celsius, changed that, however, drawing out multitudes of people to view and appreciate the beautiful and famous pink flowers.

“It’s very romantic,” said Gu Shuyi, a tourist from Beijing, China. “I had heard that the petals of cherry blossoms are like snow, and I agree. I think it’s very beautiful that we can see something like snow in warm weather, in a season of rebirth.”

Holy men trooped down Ueno Park paths, walking in time to the sound emanating from their flutes, while other people rowed boats in the moat of the Imperial Palace. Beautiful.

Spring, it appears, has indeed arrived.

Experience the beauty of nature in your aquarium without the requried husbandy skills with a a tree from my Bonsia Collection!