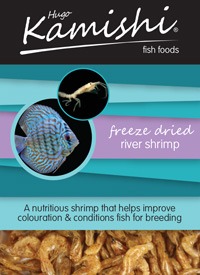 River Shrimp is an excellent addition to the dietary regime of all tropical, marine, coldwater fish and turtles. River shrimp can also be ground or crushed to feed smaller fish

The head has compound eyes, which give them multifaceted vision so that they can look out for predators

By moving their legs, they also circulate fresh, oxygen-rich water over their gills

The life cycle of river shrimp (Gammarus Pulex) is quite intricate. The male will clutch the female before determining which one is likely to yield a lot of eggs. The male will then carry his chosen mate for a number of weeks before her skin is shed, enabling the male to mate with her. Afterwards, he releases her, and she will carry the developing young in what is called a “brooding pouch”. After around 28 days, the young shrimps are ready to venture out of the brood pouch, and a few months later are able to breed and find a mate for themselves. As the female river shrimp can produce up to 50 young each month, it does not take very long at all for a large population to emerge.

Hugo Say “The wise man should consider that health is the greatest of blessings. Let food be the medicine.”