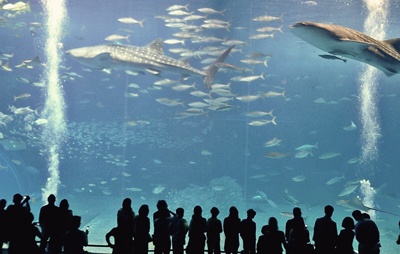 My homeland of Japan, as an archipelago or island chain, and this means that the sea and the life within it have always enjoyed a prominent place in Japanese culture. This undoubtedly explains, at least in part, the success and status of the large aquarium. And by large I do not mean one that might take up a sizeable proportion of your living room floor area, no I mean gigantic, very public aquariums. I have put my thinking cap on, and I have created a list of the top five most beautiful Japanese aquariums.

Number one on the list is the Sumida Aquarium in the nation’s capital, Tokyo. This is a new aquarium because it was installed together with the Tokyo Sky Tree, and forms part of the Soramachi complex. This is perhaps not the biggest aquarium. Nevertheless, precise attention was paid to its development. Distinct lighting and marine vegetation make each basin an extraordinary subaquatic experience. The display is dedicated mainly to marine life from Tokyo Bay and smaller animals. There is also a large column of several thousand goldfish and this, as I have alluded to before, is considered a symbol of good fortune.

At number two on the list is another Tokyo aquarium, the Epson Shinagawa Aqua Park. Although not strictly just an aquarium as they do have dolphin shows and the like, it does house a spectacular 20-metre underwater passageway that lets you walk right through a sea of manta rays along with, like many Japanese aquariums, an extensive exhibition of jellyfish! As the aquarium is located in the Prince hotel complex in the heart of Shinagawa, it is very easy to access.

Next, we venture to Yokohama and visit the Sea Paradise, Hakkejima. This is actually so much more than a simple aquarium as it is actually an artificial island nearby to Yokohama devoted to the sea and constructed purely for enjoyment. Here, again there are dolphin shows but also restaurants, exhibitions and lots of other attractions. The aquarium is notable for its enormous windows that stretch almost 10 meters high! A good place to spend a day with children. Even gaining access to the site is in itself an attraction because it offers spectacular views of the coastal backdrop of the beautiful bay of Tokyo!

Now we move South to Osaka and the Aquarium Kayuukan. This aquarium is truly something to behold. It is in a massive building on the Osaka port and exposes over 11 floors of basins showing the myriad marine life of the Pacific Ocean. From small fish to huge whale sharks and otters and seals. The Kayuukan is far and away one of the principal attractions that Osaka has to offer. The giant 30-meter pools are really quite something! There is also an exclusive contact zone where some of the wildlife can be touched and observed more carefully.

Finally, we venture all the way south to the sub-tropical paradise of Okinawa and its Churaumi Aquarium. The Churaumi Aquarium is the third largest on the planet (after the Georgia Aquarium in the USA and the Mall Aquarium in Dubai). It truly is beautiful and was constructed to showcase the wonders of the tropical waters of Okinawa but also to function as a study centre. The aquarium is also an integral part of a vast park that encompasses a traditional Okinawan village, museums and a section of untouched coastline with beaches and mangroves.